The Rise of Omicron—Here We Go Again?

Over the last 10 days, the identification of a new SARS-Cov2 variant (B.1.1.529) has caused concerns and market turbulence as the scientific and investing community try to determine the potential impacts. First identified in Botswana, and then in larger numbers in South Africa, Omicron (as designated by the World Health Organization) has many properties and mutations that raise red flags and warrant close observation. What we attempt to do here is outline, as we have several times during the pandemic, what we do and don’t know about the new variant and put potential impacts on people and the markets in context. First, let’s look at the questions surrounding Omicron, before jumping into the market outcomes, and of course your portfolios.

The top concerns of Omicron

The concerning features of Omicron that have quickly caught the attention of the global community are:

The key message we want to leave you with is that although concerning, the data is extremely preliminary and it is too early to say what the impact will be. For the new variant to be a legitimate threat to the progress we’ve made globally, three things must happen:

So, let’s look at these in turn.

One of the major concerns from the early data is that Omicron appears to be outcompeting Delta, which itself is extremely transmissible. Data from South Africa appear to show a faster rise in Omicron prevalence than any variant before it. The variant also shares mutations with Delta that are believed to enhance transmission. 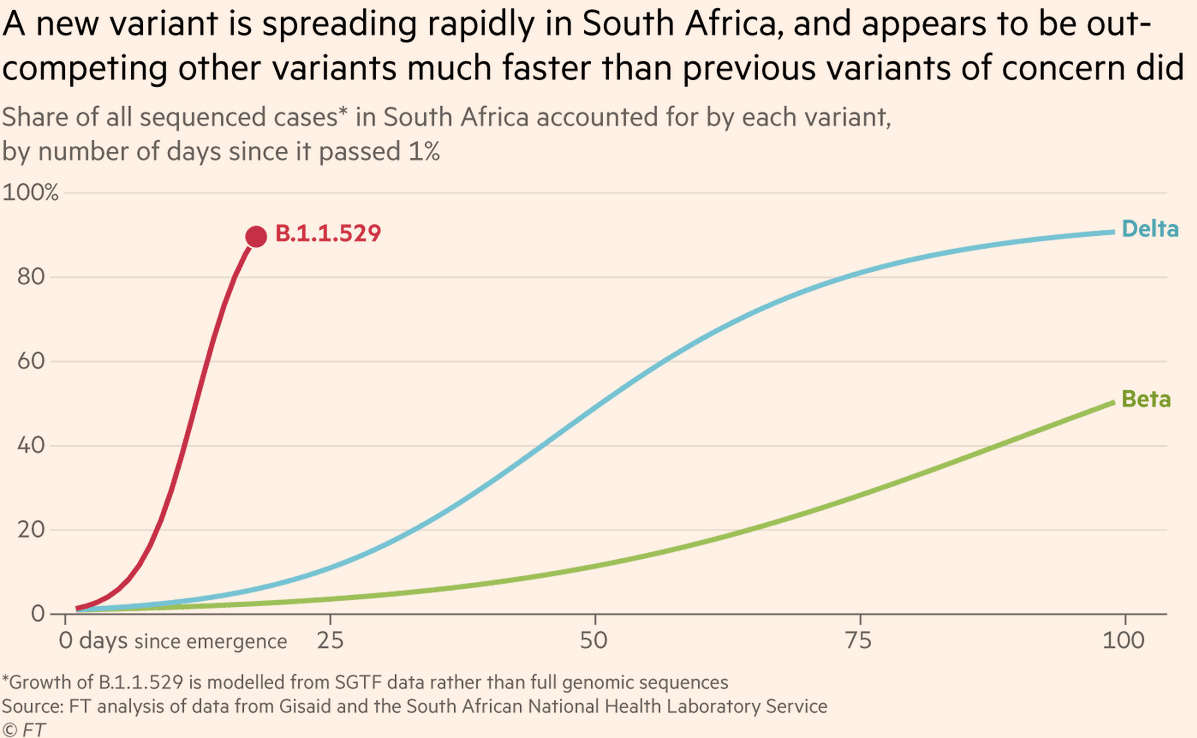 However, there are several reasons why this analysis could be misleading and should be viewed with caution, particularly when trying to extrapolate globally.

All this is to say the rapid rise of Omicron is definitely concerning, but drawing conclusions about how it may spread across the globe could be overly pessimistic.

Will it evade current vaccines?

Based on mutational analysis, it is likely that antibodies produced by the current vaccines (Pfizer, Moderna, AstraZeneca, etc.) will be less effective in binding and neutralizing Omicron. Many of Omicron’s mutations have been observed in other less transmissible variants that reduced immune effectiveness. However, even with those mutations, the vaccines remained very effective at reducing the worst case outcomes such as hospitalizations and death. Protection by the immune system is not only driven by antibodies, but also by more durable immune responses (such as T-cells) which should maintain much of their protective ability, even against the Omicron variant. While it’s possible that protection will be reduced somewhat, complete immune evasion (and a reset of global ‘vulnerability’) is not likely.

Very early data from South Africa suggest that the vast majority of people testing positive are unvaccinated, and that vaccinated people are faring better than the unvaccinated in terms of outcomes if infected. Obviously if the vaccines were useless, that would not be the case.

It should also be noted that, if needed, variant-specific vaccines can be generated quickly (particularly mRNA vaccines) and could be available in large supply in as soon as three to six months. Third doses of current vaccines could also provide additional protection as an enhanced immune response should increase protection against all variants.

Will Omicron be more virulent than previous strains?

One fear with Omicron (which has been the fear with every new variant) is that it will be more virulent (damaging) than previous strains. There is little to suggest this will be the case, both from a theoretical and empirical viewpoint.

Theoretically, there is a selective advantage in a new variant that can replicate faster than a previous version, which is why variants with faster transmission (and to some extent, immune evasion) are to be expected. There is no selective advantage in a variant that does more damage to its host (in fact it’s a slight disadvantage), so more deadly strains are not expected to outcompete less deadly versions.

Empirically, no other COVID-19 variants have demonstrated a material increase in virulence, despite early warnings that they would. Therefore, we should not expect it with Omicron, even if it has other properties we are concerned about. There has been some anecdotal data suggesting Omicron could even be milder than Delta, although this data is preliminary and should be viewed with caution.

If that is the case, it would be good news. In fact, the best case scenario for the pandemic is that the virus mutates into something that spreads easily but doesn’t do much damage. A less virulent version taking over is not unprecedented in the world of infectious disease. For example, the Spanish Flu mutated to become a normal seasonal influenza virus by 1920, and it is believed the H1N1 influenza in 2009 did the same.

What does this all mean?

Ultimately, we will learn the answers to all three of these questions as data is accumulated. Over the next few weeks, we will know if antibodies are less effective at neutralizing the virus (likely), how virulent the virus is in less vaccinated populations (unclear, but unlikely to be worse than prior) and will start to see if existing vaccines provide protection (unknown, but likely). Over the next few weeks and months, we will get a better idea about spread (if Omicron can outcompete Delta globally) and a more robust view on the effectiveness of vaccines in well-vaccinated populations (we expect significant protection against worst case outcomes).

Our view is that Omicron could represent a temporary setback in the path out of COVID-19, but not a reset. As effective antivirals become available and vaccinations levels continue to rise, we expect the global health burden of COVID-19 to wane and the path to normalcy to be clearer. As we have said many times, it won’t be a straight line, but the direction is set.

Omicron and the markets

Over the past week markets have been buffeted by two significant shocks. First, of course, was the sudden rise of the Omicron variant that roiled markets over the U.S. Thanksgiving/Black Friday holiday, typically a time of low market liquidity and hence prone to outsized market moves. As mentioned, there is much we do not yet know about the variant, and markets do not like uncertainty. But there is plenty of reason to support the conclusion that Omicron will represent more of a temporary setback and the economic and market outcomes should subside relatively quickly.

We are in the midst of a stronger than expected U.S.-led economic reacceleration following the summer slump and we expect an above-trend economic trajectory into 2022 led by strong household consumption and business investment. At the same time, we’re facing inflationary implications of robust demand, constrained labour and supply chain dynamics. This, combined with the strong U.S. trajectory has, in our opinion, contributed to the second market shock of the past week...

The U.S. Federal Reserve (the “Fed”) made a very hawkish pivot towards an accelerated tapering of quantitative easing and liftoff for U.S. interest rates. Importantly, the pivot came after the Omicron news broke and the commentary made clear that the decision did incorporate potential Omicron impacts on both demand and supply-side dynamics.

While we expect elevated inflation levels to subside throughout 2022, we have argued that, for markets, what really matters is how the “Fed” interprets the unfolding inflation dynamics. And they just shifted their view. This is a material development and can be expected to drive further near-term market volatility as market participants adjust their positioning in response. A more robust economic outlook coupled with a more hawkish “Fed” reaction sets up for more fragility and hence volatility in risk assets. But it does not send a clear-cut signal to exit risk markets—rather it says, ‘buckle up this may get bumpy.’

While there is a risk that elevated inflation may force the Fed to tighten too aggressively and curtail the economic cycle, this is not the base case. Instead, we expect the economic cycle will remain sufficiently robust to withstand a more aggressive policy tightening path, particularly given the ultra loose starting point of zero interest rates. Key to this outcome will be a moderation in the inflation trajectory from current very elevated levels as we progress through 2022.

With quantitative easing now slated to end in Q2, and the first rate hike in Q2-Q3, the Fed will have a further six months or so of data to help inform its decisions. If core inflation is rolling over, as we expect, policymakers will be more moderate in their reaction to support an ongoing economic expansion. If by mid-year inflation remains well above say 3%, they may be forced to tighten in a manner designed to curtail the economic cycle, risking an earlier slowdown or recessionary outcome. For now, that is a tail risk to be monitored, not the base case.

Portfolio positioning to see you through

With respect to our fund positioning, we continue to monitor and intensely discuss the potential implications to our views. For now, we remain positioned for an ongoing economic expansion—overweight equities with a tilt toward cyclical exposures and underweight government bonds. We expect both above trend economic growth and inflation to drive stronger earnings and rising interest rates from current levels, with higher rates and more volatility being a headwind to valuations. We foresee an outperformance of risk assets in the coming year but would caution that the best returns are behind us as markets grind slowly higher in a two step forward, one step back type of fashion in the coming year. Drummond Brodeur, is Senior Vice-President and Global Strategist at Signature Global Asset Management. Mr. Brodeur has been in the investment industry since 1989. He has a strong background focused on China and the Pacific Basin. Prior to joining Signature in 2007, he oversaw international portfolios as Vice-President, Investments, at KBSH Capital Management Ltd. Previously, he was a senior analyst of Asian equities with the Caisse de Depot and Portfolio Manager, Asian Equities at Bankers Trust Australia. Mr. Brodeur holds a BA from the University of Western Ontario, an MA and MBA from Monash University, Melbourne, Australia, and the Chartered Financial Analyst designation. 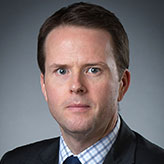 Jeff has more than 16 years of investment industry experience and specializes in the global healthcare sector. Prior to joining CI Global Asset Management in 2013, Dr. Elliott analyzed global pharmaceutical equities at Sectoral Asset Management and was a senior equity research analyst at UBS Securities in New York and Toronto. Jeff holds a B.Sc. in Biochemistry from Queen’s University, a Ph.D. in Molecular Biology and Biochemistry from Simon Fraser University, an MBA from the University of Western Ontario, and holds the Chartered Financial Analyst (CFA) designation.

Sometimes the markets are uneventful. This isn’t one of those times. Macroeconomic and geopolitical issues have led to extreme market volatility. Our latest quarterly outlook explores the current landscape and what’s likely coming up.

Senior Vice President and Global Strategist Drummond Brodeur provides his outlook for the year ahead, discussing the emergence of Omicron, Fed policy shifts and what we can expect for 2022.

Bitcoin has created a new asset class that may become one of the biggest technological developments since the Internet. Here’s why we believe it will continue to differentiate itself further from traditional asset classes as time goes by.
view all