How to Calculate Return on Investment 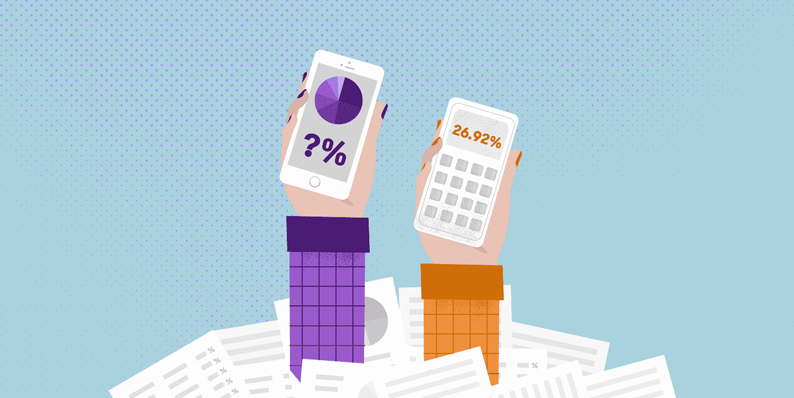 What’s the actual rate of return on your investments? Ever scanned over a prospectus or batch of investment documents and wondered about that? You’re not alone.

But if you’re a more seasoned investor, you might want to better understand exactly how these different rates are calculated in a bit more depth. Spoiler alert: there’s some math ahead. Put on your thinking cap.

The Simple Rate of Return is the percentage gain made on the initial amount invested.

It’s commonly used for GICs with a 1-year term, accounting, and financial statements.

The Annualized Rate of Return of an investment is commonly used for investments with no additional cash flows. For instance, it might apply to some GICs and term deposits. It could apply to the appreciation of real estate market values. We could also use it to evaluate the performance of an investment over the window of time between cash flows in that investment.

Since the Compound Annual Growth Rate assumes a constant annual return, it ignores volatility. It also doesn’t account for the timing and amounts of cash flows along the way.

As such, it doesn’t tell the whole story for investments that fluctuate in value. It also doesn’t show where multiple cash flows occur over time.

Let’s say you use this method to evaluate performance during a period of time where money was deposited or withdrawn. You also used it when investment income was received and re-invested.

In that case, your cash flows will actually make up part of your return. That would give you the wrong information. You’ve been forewarned!

This shows the annualized return on an initial investment. It also shows growth compounded over time between cash flows which occur at regular intervals.

It is commonly used for Indexes, Mutual funds, ETFs, some GICs greater than one year, or any investment that compounds returns.

The Time-Weighted Rate of Return is similar to the Simple Rate of Return. It accounts for additional cash flows made over time by taking them out of the return.

In this example, the Simple Rate of Return over the entire 3 years is 26.92%. Unfortunately, this doesn’t give you a good sense of what your compound annual rate is on your investment. The result it is not annualized and it is also including your deposits in your return.

This isn’t terribly helpful. We already knew the interest rate we were getting on the money.

The Time-Weighted Rate of Return is the best way to understand your return in this example. It provides you an annualized return that doesn’t include your cash flows in your return.

Improving the clarity of your rate of return calculation

Want to remove your deposits, withdrawals, and re-invested investment income from calculating the return? Looking to compare the performance of your investment to some other investment or index?

You’ll need to know the Time-Weighted Rate of Return. That way, we can make an apple to apple comparison.

The Time-Weighted Rate of Return does a great job of showing you the annualized return of an investment over time. That’s especially true where all cash flows take place at regular intervals and compound over the same periods of time. The Time-Weighted Rate of Return is the standard method for reporting the performance of investment funds, like ETFs and mutual funds.

However, the Time-Weighted Rate of Return falls short when you want to understand your own account’s performance and you have cash flows of different amounts over different periods of time.

The Time-Weighted Rate of Return gives equal weight to each period between cash flows. This means that it doesn’t account for cash flow periods with different spans of time.

In our earlier example, it didn’t matter because each deposit happened at the start of the year. However, if the deposits took place at irregular intervals, each period would be given equal weight. That’s true even if that period is only 1 day, and others are a year or more! When you have time periods that vary, it’s best to use the Money-Weighted Rate of Return. It does a better job accounting for cash flows over any period of time.

Your cash flows are “discounted” to remove them from your return, and a calculation is made to estimate the annualized return needed for your initial investment to arrive at the present value. This is the Money-Weighted Rate of Return.

The Money-Weighted Rate of Return is similar to the Time-Weighted Rate of Return. However, it does a better job removing cash flows from your return. It is the best reflection of your personalized overall performance. That’s because it takes into account the money deposited to and withdrawn from your investment. It also accounts for re-invested distributions of investment income.

Let’s say you set up an account that you want to use to help you buy a home in 3 years. You start with a deposit of $100,000, then add another $50,000 at the start of year 2. Then you withdraw $10,000 halfway through year 3 for a deposit on the home purchase. You cash out your account at the end of the 3rd year for down payment on the new home.

The market value of your account is shown at each cash flow date. That way, you can see how you are coming along.

To keep it simple, we’ll assume there are no other cash flows from investment income. With all of that in mind, what the heck is your rate of return in this account?

Balance at start of period

Balance at end of period

In this example, the Money Weighted return is the best way to show how your account performed over the three years. That’s because it takes into consideration how you have been depositing and withdrawing money. The Money-Weighted Rate of Return is the standard method for reporting performance of investment accounts.

Are you a CI Direct Investing member? Need help understanding how your rate of return is calculated? Feel free to bring it up with our financial adviser in your next catch-up. We’re here to help.

RRSP vs. TFSA: Which is right for me?

How to Maximize Your TFSA Investment