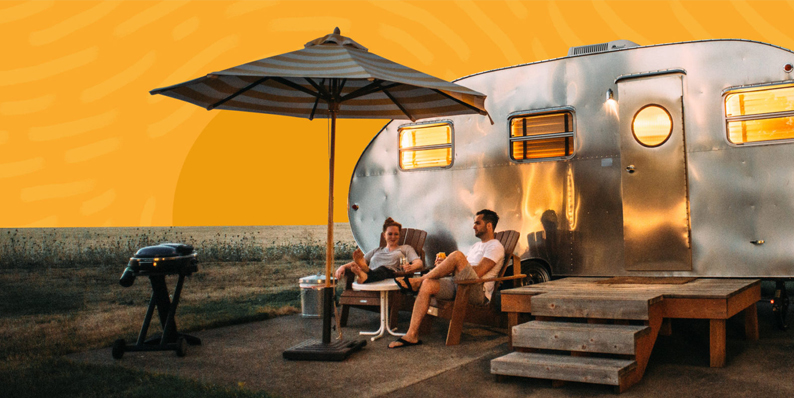 Wouldn’t it be nice to retire a lot earlier? For a growing number of us, Financial Independence, Retire Early (FIRE) is the name of the game.

Retiring early is a very ambitious idea. Still, it’s particularly en vogue among millennials. The big idea: make money, save a ton of it, then retire as early as 45 and enjoy your time. Perhaps you’ll subsidize your lifestyle with paying passion projects, taking on paid work as you travel in a camper van, selling T-shirts on a sunny beach where the cost of living is low, like in Thailand or Costa Rica.

The basic rules of FIRE

What’s the formula to set your retirement on FIRE?
Two basic principles

When you’ve saved up an amount equal to 25 times your annual expenses, congratulations! You’ve set your retirement plan on FIRE.

From there on, you follow the 4% rule. That is, 4 percent would be the amount that you withdraw from your nest egg every year of retirement to cover expenses. Assuming a relatively conservative 4 percent rate of return on that investment, you’re just living off the investment return — and paid work becomes optional, as you retire early.

Following this plan, if you’ve saved enough, paid work can become optional when you retire early.

But pay attention to these important Fire Alarm rules or risk getting badly burned, financially:

When we’re talking about your savings, we’re referring to after-tax savings. You can’t just not pay the government and skip town at 45, fleeing to Latin America.

FIRE Alarm Rule #2. Inflation could put your FIRE plan up in smoke

This plan is a basic guideline: but it doesn’t take into account inflation. Even at a modest 2 percent rate of inflation, the plans might not pay fully for your early retirement needs. You may start eating into your principal early to pay for your cost of living.

The vast majority of people can’t just put their money into their mattress and expect to retire early. You’re going to depend on making some money from your money before you retire.

Your personal situation will differ. However, here’s what the average Canadian household spent in 2017, according to the latest available from Statistics Canada (which we will be citing throughout). Let’s use these figures as a baseline for you.

What a Canadian households pay for

What if you’re having a FIRE retirement outside of Canada? In that case, your total consumption could be significantly less (eg. retiring in Mexico or Thailand, where the cost of living is lower). You’ll have to do a bit of country-specific research if you’re planning a retirement abroad).

Your personal goals will change your approach to FIRE. And it’s not for everyone. But if you’re looking to try out some version of FIRE for your own retirement, here are three ways you could do it, from most risky to least risky: FIRE with Funemployment, Lean FIRE and Fat FIRE. 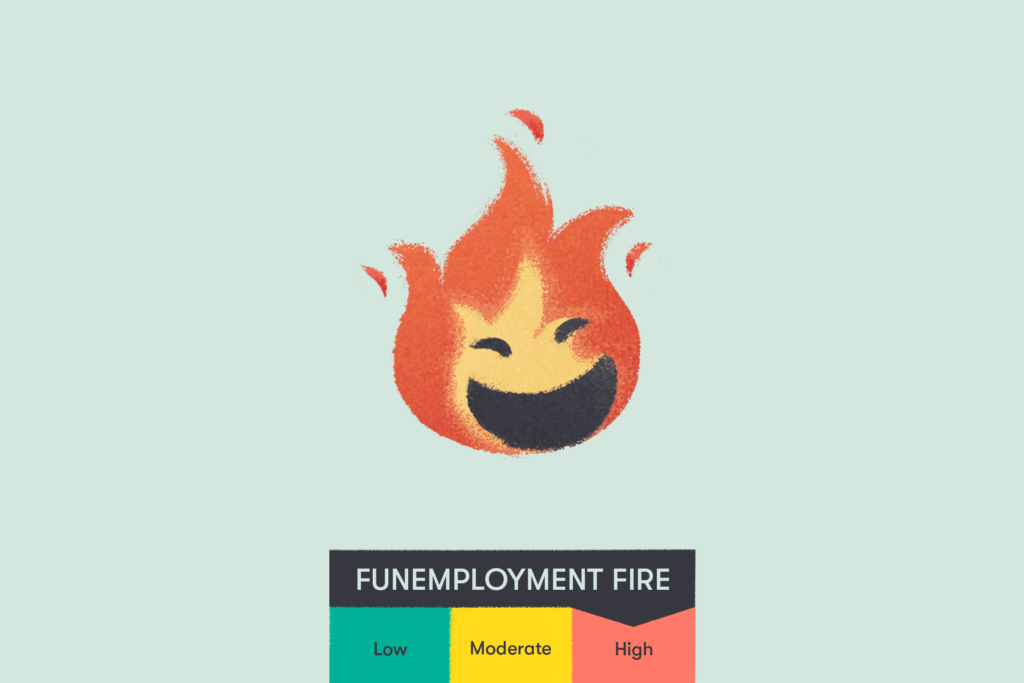 Very high. If you can’t find paying passion projects when you’re older, you might not have enough to live on.

Someone who isn’t planning on saving as much, but still wants to retire early.

What your Funemployment FIRE savings will pay for in retirement

Not much. Just basic consumption (including only food, transport, clothing — and not shelter, or anything else). “Just-the-basics” comes to ($24,664/year) Source: Statistics Canada

What you STILL need to pay for in retirement, from your “funemployment” income

Yes. Hopefully you’ve got some special skills or can find paid work at a job you love.

How much will you need to save before you have a Funemployment FIRE?

Amount you need to save for a Funemployment FIRE for 25 years, at a 6% average investment return (again, not including taxes).

With a Funemployment FIRE, you’re only saving to cover some of your basic consumption expenses in retirement, not total consumption. You will still have a lot of unfunded expense, such as shelter, recreation and healthcare.

Or another way to put it: it’s called Funemployment FIRE for a reason…

To cover the shortfall between what you’ve saved and what you need to live on, you’re going to have to keep working. You could be a good candidate for this if:

Maybe you’re enjoying a low-stress role in a restaurant. Or you’re working on a ranch, enjoying the great outdoors, no longer stuck in an office. The point is that you’re doing the work you always wanted to do, not the work that you took in the first place just for the paycheck.

The risks of lighting a Funemployment FIRE

If either of these scenarios happen, you could go from funemployed to unemployed. Then you are scrambling in your autumn years to pay for the expenses you didn’t properly fund when you were younger.

Don’t like that level of risk? Willing and able to save more? Let’s look at the next option. 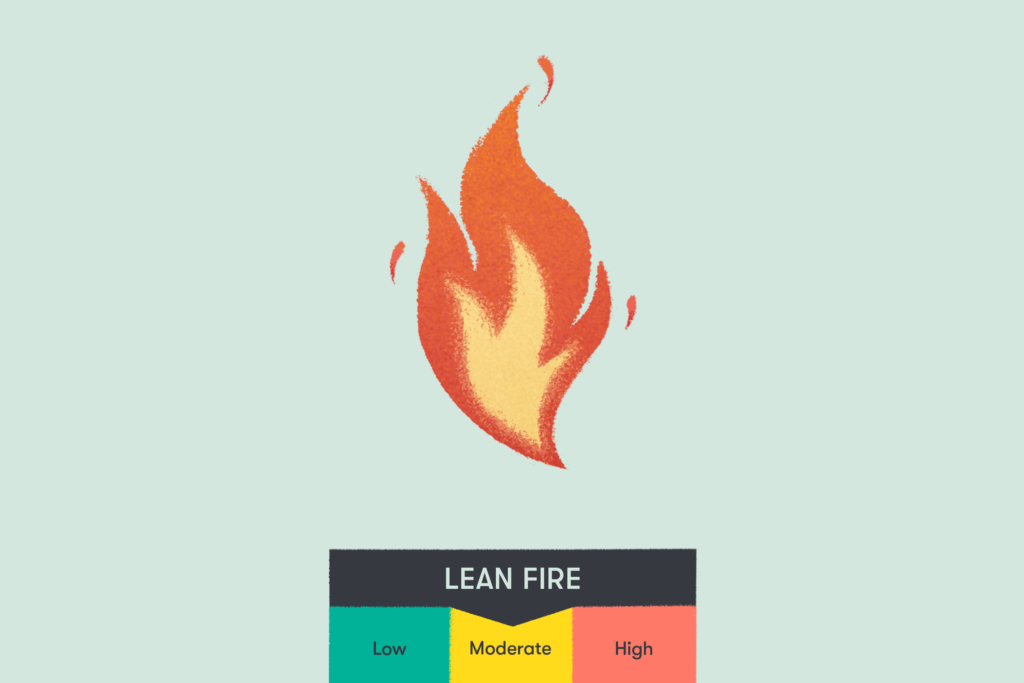 Medium. You’ve got a financial buffer if you can’t chop expenses enough or have trouble finding paying passion projects.

Someone who is saving for retirement, but doesn’t have big expensive plans — or will live in a place where the cost of living is lower

What your Lean FIRE savings will pay for in retirement

Based off the average consumption expenditure per household in Canada ($63,723/year) Source: Statistics Canada — but your actual needs may vary significantly.

What you STILL need to pay for in retirement, from income earned after retirement

Those “nice-to-have” expenses like recreation and entertainment. In fact, you might have saved to fully fund a thrifty lifestyle in Canada, or living in a sailboat in Latin America.

Probably, at least part-time. Hopefully you’ve got a specialty or can work at a job you love, so it still feels like retirement.

How much will you need to save before you have a Lean FIRE?

Amount you need to save for a Lean FIRE for 25 years, at a 6% average investment return (again, not including taxes

Welcome to a Lean FIRE. You have more wiggle room financially, because you can save significant sums for years to come.

Maybe you’re going to grow your own vegetables and stay thrifty in early retirement. For now, you might be double-income, no kids (with no plans to leave a legacy). You only need to save to be comfortable in your autumn years. You have no ambition for world travel, fancy furnishings and other extras.

The Lean FIRE is a bit of a hybrid model between Funemployment and a Fat FIRE. There’s no one-size-fits-all formula, here.

But what if you wanted even more of a financial buffer in retirement? Let’s see what a Fat FIRE looks like. 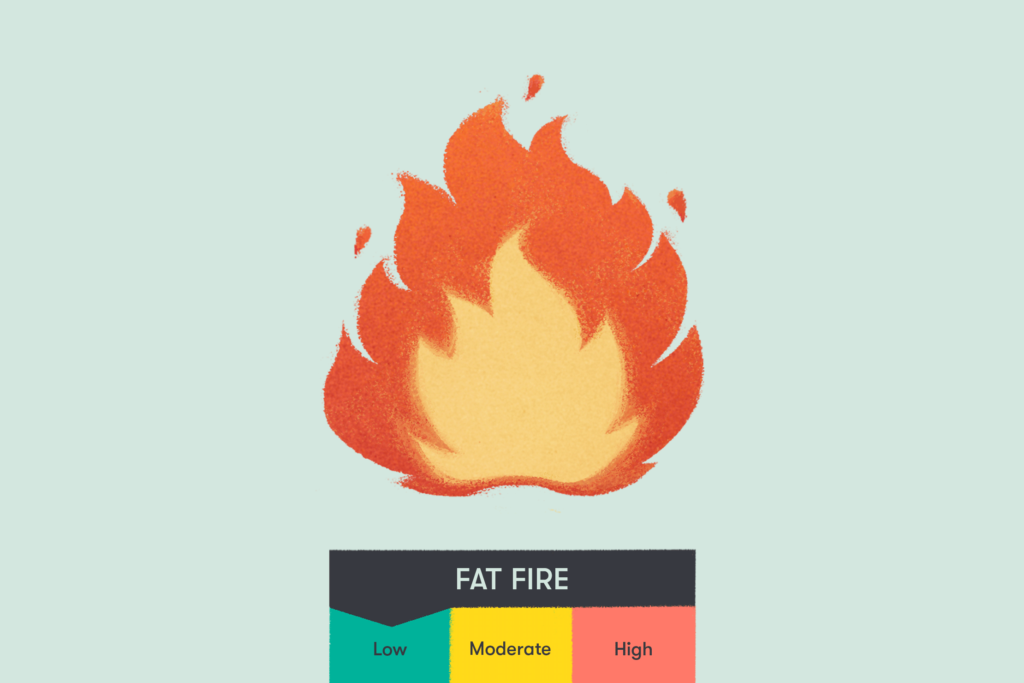 Someone who saved a lot. You worked hard. Now you can play hard!

What your Fat FIRE savings will pay for in retirement

Everything. Pretty much the same expenses as before you retired, or more… but without a mortgage to pay, you can live even larger. For a Fat FIRE, we’re estimating a total of $80,000/year.
We’re using average consumption expenditure per household in Canada, $63,723/year (Source: Statistics Canada) plus a buffer of $16,277. That buffer is a bit arbitrary — you’ll need to adjust for your own personal “living large” spending plans.

What you STILL need to pay for in retirement

Nothing. You’ve got this covered.

No! Not unless you feel like it. Enjoy your hobbies, go traveling… or just enjoy your front porch. It’s up to you.

How much will you need to save before you have a Fat FIRE?

How much would you need to save  if you wanted to save for a Fat FIRE in 25 years, at a 6% average investment return(again, not including taxes).

With a Fat FIRE, you’re not OK with risk. You want to live large in early retirement. You’ve saved and saved… and when you hit retirement early, you get to cut loose.

In a way, this is the easy FIRE plan: you can do what you want in your early retirement, without worrying as much about the details, because you’ve saved so much at the tender age of 45 or 55!

On the other hand, this is the most difficult retirement plan to execute correctly.

It’s not just about saving enough. It’s about saving significantly more than someone who is taking an extra 10 or 15 years to save for retirement at 65. Frankly, this is out of reach for most Canadians.

That’s pretty ambitious. Is it even do-able? For most people, this isn’t realistic. However, for people with higher incomes who save and invest a lot, it’s possible.

A cautionary note about setting your retirement plan on FIRE

FIRE isn’t for everyone. If you find meaning in your career and love what you’re doing, retiring early might be the last thing on your mind. As well, the sacrifices involved can be pretty rough. Not everyone is willing to live with a strict budget in their prime earning years, leaving the fun times for later.

How Much Should I Contribute to My RRSP?