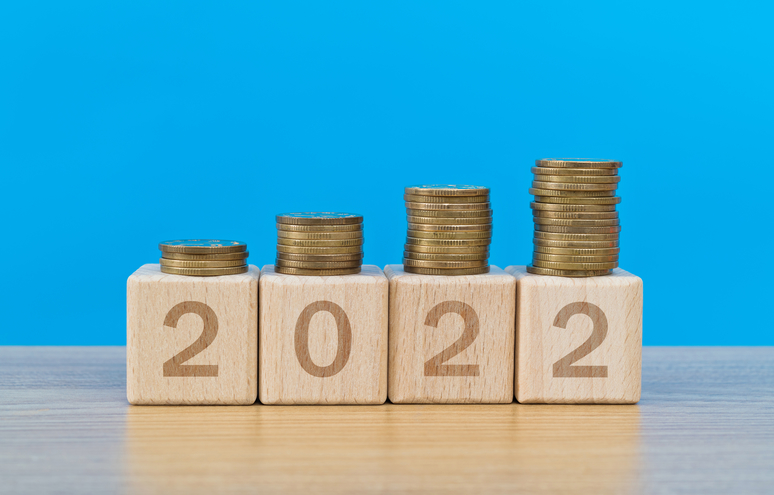 As we enter 2022, we will once again follow the custom of sharing our market outlook for the coming year. Our expectations for 2021, strong equity performance and challenges for fixed income, came to fruition. We believe the first and second halves of 2022 will be quite different in terms of volatility, opportunities and sector leadership. So, without further ado, let’s look at what’s ahead.

With elevated household savings and slower projected COVID-19 cases, we anticipate economic growth will remain robust through the first half of the year. This means companies will hire and wages will increase, leading to greater consumer confidence and corporate earnings. After two consecutive years of money supply boosts and near-zero interest rates globally, earnings have recovered swiftly from 2020 and even surpassed 2019. We anticipate the largest 500 companies in the U.S., as tracked by the S&P 500 Index, to have average earnings per share of $235 in 2022. 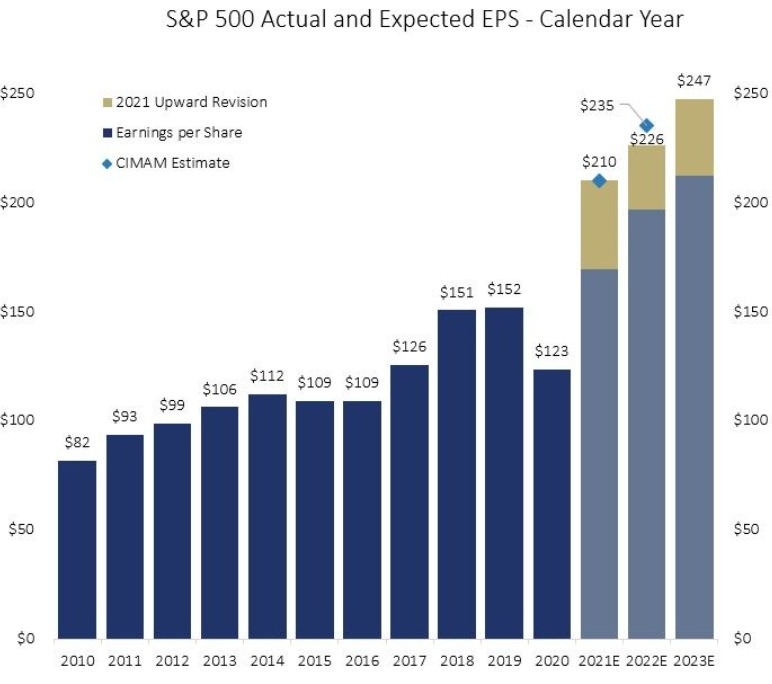 Within equity, cyclical sectors are likely to outperform. The bad news is inflation—currently running at over 6% in U.S. and almost 5% in Canada. This means investors will only be better off if their savings grow above those rates. We expect central banks to remove stimulus, but only very gradually, and real interest rates to be negative for some time.

It’s widely expected that by the end of 2022, interest rates will be at least 50 basis points (bps) higher. It’s important to note the burden of interest rate increases will be greater than normal as debts owed by governments, corporations and households are significantly higher. Hikes of 50 bps annually can probably be tolerated, until they rise to over 2% at which point, they could trigger a slowdown or recession. We anticipate this hike cycle to be faster but shallower than the last one when Canada peaked at 1.75% and the U.S. at 2.50-2.75%. With terminal interest rates at about 2%, long-dated bond yields should be capped at the same level. However, as interest rates rise, the markets may price for more, creating volatility and opportunities.

Inflation should remain high, albeit declining in the second half of the year. The 2% low inflation era is over thanks to structural shifts such as increasing labour costs globally and rising commodity prices as manufacturers comply with local and international environmental standards. 3% inflation is probably the new normal for the next decade, even as the supply chain disruptions ease.

In light of these developments, we are positioning our portfolios to overweight equity and underweight bonds. We are still in the early stages of this growth cycle as savings accumulated during the pandemic have not yet been fully spent and investors are eager to defend their purchasing power.

Equity remains the only preferred asset class, as even high-yield bonds are barely outpacing inflation. With 3% inflation and 2% bond yields, investing in bonds only makes sense when earning capital gains in addition to income. Investors may get overambitious from time to time and drive yields above normal, but we will be patient until then before adding bonds to our portfolios.

We are living in a world of rapid changes and the impacts will be felt across markets. To taper volatility, we’re favouring sectors that are less sensitive to economies, such as technology and health care. We also have foreign currencies at our disposal, such as the U.S. dollar and Japanese yen, which can help offset equity risk.

There are risks we are watching closely. Central banks may turn hawkish sooner than expected, geopolitical tensions could worsen and COVID-19 cases may rise due to new variants, forcing governments to implement new lockdowns. We will maintain our equity overweight as long as these issues are at bay.

The bottom line is we anticipate some volatility due to growing concerns of a slowdown or recession. The downside is still low given central banks may not go very far during this hike cycle and generally strong economic fundamentals. This document is provided as a general source of information and should not be considered personal, legal, accounting, tax or investment advice, or construed as an endorsement or recommendation of any entity or security discussed. Every effort has been made to ensure that the material contained in this document is accurate at the time of publication.  Market conditions may change which may impact the information contained in this document. Individuals should seek the advice of professionals, as appropriate, regarding any particular investment. Investors should consult their professional advisors prior to implementing any changes to their investment strategies.

Certain statements in this document are forward-looking. Forward-looking statements (“FLS”) are statements that are predictive in nature, depend upon or refer to future events or conditions, or that include words such as “may,” “will,” “should,” “could,” “expect,” “anticipate,” “intend,” “plan,” “believe,” or “estimate,” or other similar expressions.

Statements that look forward in time or include anything other than historical information are subject to risks and uncertainties, and actual results, actions or events could differ materially from those set forth in the FLS. FLS are not guarantees of future performance and are by their nature based on numerous assumptions. Although the FLS contained herein are based upon what CI Global Asset Management. and the portfolio manager believe to be reasonable assumptions, neither CI Global Asset Management nor the portfolio manager can assure that actual results will be consistent with these FLS. The reader is cautioned to consider the FLS carefully and not to place undue reliance on FLS. Unless required by applicable law, it is not undertaken, and specifically disclaimed that there is any intention or obligation to update or revise FLS, whether as a result of new information, future events or otherwise.